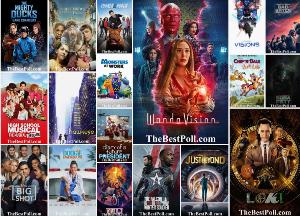 Which one is the Best Disney+ Original Series of 2021?

Disney+ is one of the most popular Internet televisions which was first launched in USA on November 2019, and later expanding to other countries. Disney+ has a lot of original series that are created and produced by 20th Century Studios, Touchstone Pictures, Pixar, Marvel Studios, Lucasfilm, National Geographic etc…

If your favourite one is not take place in our list, we can add it according to your comments above our post. You can vote only once in 24 hours. Please respect to other voters and don’t violate the rules.

The Most Handsome Men in the World 2021

The Most Beautiful Women in the World 2021

The Best Turkish Tv Series of All Time

The Best Couples on Turkish Tv Series All Time

The Best Actresses of Turkish Tv Series All Time

The Best Actors of Turkish Tv Series All Time